What to do when your honey crystallizes

Your honey has turned lighter, stuff at the bottom of the jar (or the entire jar’s contents) has solidified. Instead of luscious, liquid honey, it’s turned into a crunchy mess.

First, always store honey at room temperature to prevent rapid crystallization. The ideal temperature is somewhere between 55° and 60°, never keep it in the refrigerator. You can solve the problem by making sure the crystallized honey is in a glass jar, place it into a warm water bath, created by heating water in a pot on the stove, within 30 minutes, you’ll have beautiful liquid honey again.

Actually, crystallization means this honey is good honey. Honey is mostly just sugar and water. Eventually some of that sugar, the glucose, separates out and attaches to small bits of bee pollen, propolis or beeswax in the honey, forming crystals. Those bits of “stuff” is what provides the health benefits of honey.

Crystallized honey is delicious when used as a spread on bread, sprinkled into yogurt or over fruit, or used in recipes (its consistency is easier to work with and solid honey has a richer taste). Excerpts from Diethive.com Thank you Whitney Vose for your suggestions. Happy Windowsill Gardening! Planning on Buying a Christmas Tree?
You might like to know that they’re getting greener and greener.

Tree farmers started asking the sustainability question about twenty years ago. They then began shifting to newer, healthier cultivation practices. Paul Smith, who has owned Cool Springs Nursery in Banner Elk, North Carolina for more than forty years, says that the greener practices include:

Growing trees is labor intensive; Smith estimates each tree is touched 200 times. Obstacles include sixfoot tall weeds, heavy rain, wind, hail, and drought. To keep his trees dense and attractive, he uses bonsai-tree methods. He constantly scans for harmful bugs and takes tissue samples to determine how healthy his trees are. He emphasizes that healthy soil and clean water are essential to success.

Smith is supported by people like Dr. Jeff Owen, an Area Extension Specialist from the University of North Carolina. Owen partners with growers to foster innovation and best practices. These include techniques to prevent soil erosion, minimize sedimentation, and reduce the need for fertilizers and pesticides. Owen’s philosophy is that each problem must be solved with multi-faceted solutions, with the overall health of the environment kept top of mind.

When you buy a Christmas tree, you’re supporting a progressive industry that’s striving to protect the environment. If you return the tree to mulch, you can complete the circle of conservation. It’s a nice tradition and a healthy habit. “Leave Your Leaves” – A Workshop by the Fairfield Garden Club

Leaves are a valuable resource! They add nutrients to our soil, improve drainage and reduce the need to add fertilizers in the spring. You don’t need to remove them all from your lawns and gardens. Work with your landscaper to keep all (or most) of your leaves on your property

Strategies for Your Lawn:

Strategies for Your Perennial and Shrub Garden Beds:

– If you don’t have wood mulch in your beds, you can probably leave about 8-10 inches
of whole leaves and they will compress with rain.

– If you do have wood mulch in your beds, stick with 3” of whole leaves.

– If you want faster decomposition of leaves in your beds, you can rake most of the

whole leaves out of your beds,mulch-mow them, and then blow them back in.

Strategies for Your Mulch Piles: Below is a wonderful tribute (as covered in the blog 06880) to our friend and supporter Dean Powers, long time groundskeeper of Oak Lawn Cemetery. Before he passed away a year ago, he designed and created (and donated) a tribute to 9/11 at Oak Lawn. It is lovely, serene, and everyone should go see it.  In 2019, we awarded Dean the GCA Club Civic Improvement Commendation.
Ellie Powers

A new memorial in Fairfield honors the nearly 3,000 victims killed, at 3 separate sites. It’s housed at historic Oak Lawn Cemetery & Arboretum — a 100-acre site where people have remembered loved ones for more than 150 years.

The new memorial — a pair of 9-foot granite towers atop a pentagon-shaped granite base, with a rock engraved with “Let’s Roll” that honors the heroes of Flight 93 — is impressive.

So are the trees along the walkway. A cemetery board member visited the 9/11 site in New York, gathered acorns, brought them to his home nursery and raised the trees.

Bronson Hawley called Powers “very, very dedicated (and) hardworking.” The cemetery board member told News12 Connecticut: “He worked here literally 7 days a week. He saw this site and he said, ‘boy this is great and I’d like to do something to memorialize the victims,’” says Hawley.

Powers never saw the finished work. He died of cancer in June last year. He was 69.

“Dean started designing maybe 3 years ago. He literally worked on those designs until the day he died. It was just amazing,” says Hawley.

Powers prepped the site, cleared it, planted bushes and moved trees. He even stood in the pouring rain, to watch how water flowed there.

Powers gave another gift too: His estate is paying for the cost of the memorial.

Previously, he paid for the granite. He had selected it himself, from a Vermont quarry.

A dedication ceremony this week will feature Jed Glick. He’s the brother of one of the men who rushed the cockpit of Flight 93. They prevented the hijacked plane from crashing into the US Capitol.

“Powers” is a common name. But it’s special in Westport. Dean Powers’ grandfather is the namesake of Powers Court, the official address of the Westport Country Playhouse.

His mother Eunice taught in Westport schools for many years, and played piano at the Unitarian Church.

His family did not seek fame or fortune. Instead they found satisfaction in doing their absolute best, all the time. They worked hard, and took no shortcuts.

Just like the heroes of Flight 93 — and so many others — now honored, thanks to Dean Powers, at Oak Lawn Cemetery in Fairfield. Butzi Moffitt — who as Butsy Beach owned the original ice cream parlor on Main Street in the 1950s — stopped in to Cold Fusion on Tuesday. The new gelato shop is just a few doors down from the first Ice Cream Parlor (where Brandy Melville is now).

Butzi — who also owned clothing stores on Main Street — was joined at Cold Fusion by her daughter Maggie Moffitt Rahe, a teacher at Coleytown Elementary School. Butzi also brought a photo of herself, outside the first shop.

From left: Amy Greene, and Bob and Butzi Beach, owners of the Ice Cream Parlor. MATTRESS RECYCLING EVENT
Getting ready to dispose of an old mattress or box spring?  You can arrange to have your item recycled for a useful second life by dropping it off at a free, Town-wide mattress collection event to be held on Saturday, September 18 from 9 am to 1 pm at 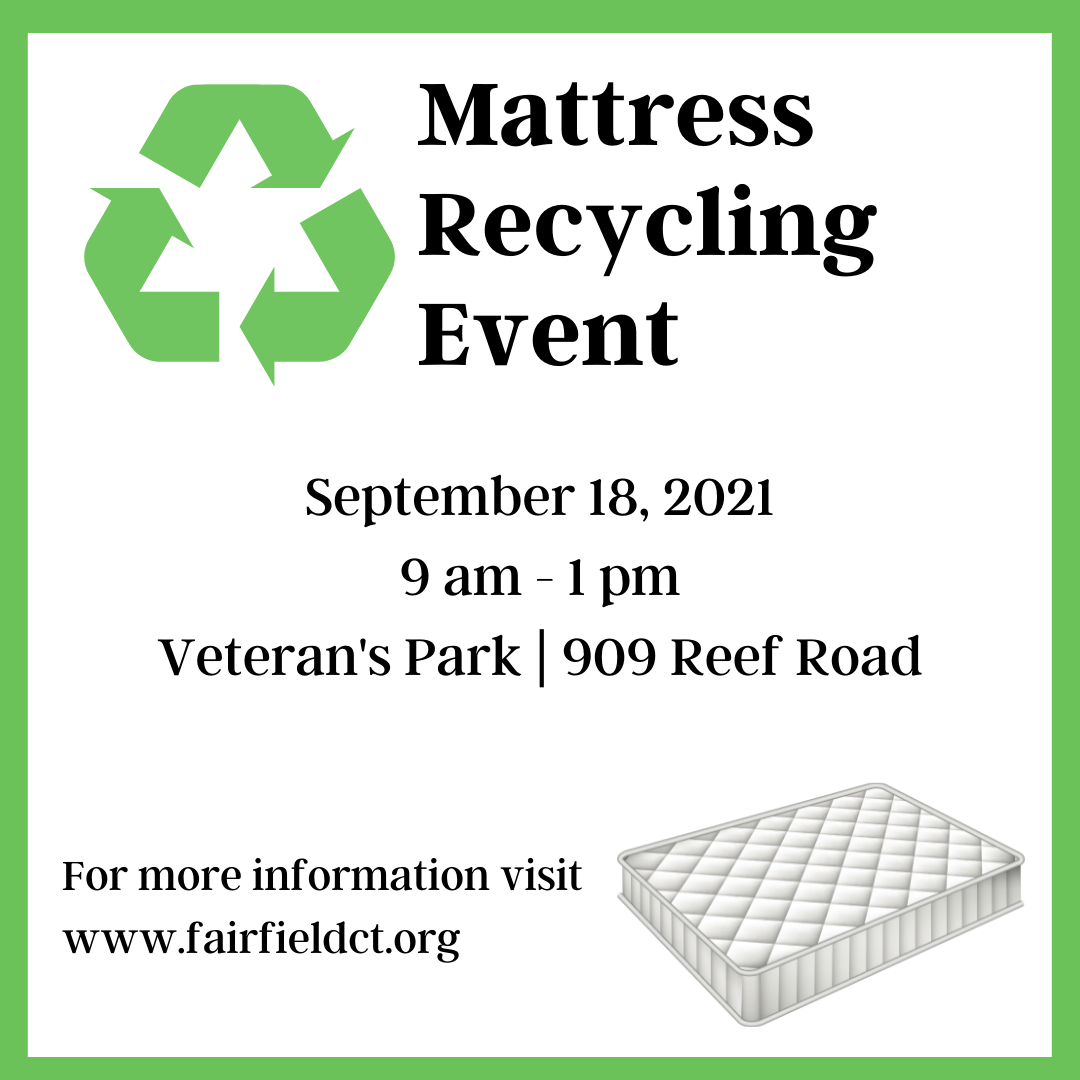 The event is sponsored by the Sustainable Fairfield Task Force (SFTF) in cooperation with the Mattress Recycling Council (MRC),  a nonprofit organization formed by the mattress industry to operate recycling programs in states that have enacted mattress recycling laws.

Any mattress, no matter when it was purchased, can be brought to the event for no-cost recycling, assuming it is not damaged, heavily soiled or posing other health or safety risks. Peggy Moore writes: Taken the day before they barricaded the parking spots at Brookside Park. While this pic would suggest it was unpopulated, quite the contrary, I had to wait for the right opening to get this. I missed getting a pic of a lady posing her dog in front of them. So cute. People are enjoying the blooms. Taken the day before the remaining open spaces/parks were closed. From Ann Toombs: Flying over Southport Harbor, this bald eagle must be one of the pair that took up residence last summer and can be seen regularly now that it is springtime.